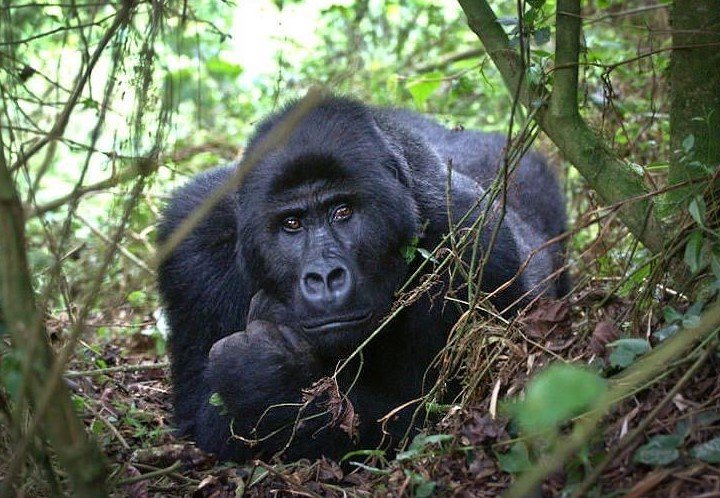 The gorilla trekking sectors in Bwindi Impenetrable national park are the 4 locations or places where mountain gorilla trekking are done. they  include Buhoma, Ruhija, Rushaga and Nkuringo.

Bwindi impenetrable national park is a famous for mountain gorilla trekking and is the habitat for more than a half of the world’s mountain gorilla population. This park was designed in 1991 and was listed as a UNESCO World Heritage Site due to its ecological importance. Bwindi forest has a huge number of gorilla families that have been habituated for tourism purpose but these families are live and can be tracked from the different sectors of the park.

All the 4 gorilla trekking sectors offer gorilla trek in a similar way and its the same gorilla permit costing USD 700 that allows visitors stay a maximum of one hour in the presence of gorillas. These four sectors differ from each other by comparing the number of gorilla families habituated and the ease of access.

Buhoma sector is the oldest among the gorilla trekking sectors in Bwindi forest. It is found in the northern part of Bwindi impenetrable national park in the district of Kanungu. Buhoma is the first sector to be opened in the park in 1991 and hosts the headquarters of Bwindi impenetrable national park. The first and oldest habituated gorilla family known as Mubare is found at Buhoma and was opened for tracking after two years of habituation in 1993. The Mubare gorilla family was named after Mubare hills of bwindi forest where it was seen for the first time. This Mubare group started with 12 members led by the dominant silverback called Ruhondeza at the time of habituation. Ruhondeza later died in 2013, currently the Mubale gorilla family has 9 members.

Buhoma sector is the prime sector in Bwindi and most preferred because of its history, the ease of tracking because at times gorillas usually come near the lodges as well as at the trekking start point. Each gorilla family is visited by 8 people for an hour each day. Most Visitors always ask for availability of permits in buhoma before any other sector especially those intersted in staying in luxurious lodges set in Buhoma. This creates high demand for gorilla permits in buhoma than other sectors. The following are the gorilla families in Buhoma sector.

Mubare family is the oldest gorilla family in Buhoma sector, habituated in 1991 and opened for trekking in 1993 it was led by Ruhondeza at the time of habituation. Mubare family started with about 18 members, due to separation after the death of Ruhondeza in 2013. Only 5 members remained but these were later joined by 4 other gorillas to make the current 9 members.

Habinyanja family that was habituated in 1997 and were opened for trekking in 1999. currently has 18 members, the group started with 30 members by the time of its habituation led by Mugurusi the dominant silverback whose death led to separation of the group. The two brothers Mwirima and Rwansigazi separated with mwirima forming a new group called Rushegura and Rwansigazi taking over Habinyanja. The trekking of this family takes approximately 5 hours to a full day of trekking.

Rushegura family habituated in 2000 with 19 members having split from Habinyanja family led by Mwirima. After mwirima’s death in 2014 the family is now lead by Kabukojo the dominant silver back with 16 members. Gorilla trekking of this family started in 2002. The trekking activity takes 3-5 hours and it frequently gets close to lodges.

Buhoma sector is the easiest to access from Queen Elizabeth national park and Kampala, and Kabale compared to all the other gorilla trekking sectors of Bwindi forest. It’s about 550km from Kampala city taking approximately 8-9hours by road. Buhoma sector can also be accessed by air from Entebbe to Kihihi airstrip. Visitors from buhoma can also access other parks like Queen Elizabeth national park and Kibale national park to join other activities like game drive in ishasha, boat cruise on kazinga channel and chimpanzee tracking.

Other activities that can be done in Buhoma apart from gorilla trekking are nature walks leading to waterfalls, birding, batwa cultural experience, Munyaga river trails and visiting village projects.

Ruhija sector is located in the eastern and is among the 4 gorilla trekking sectors in Bwindi impenetrable national park. It boarders Buhoma sector and Kibale town making it so accessible. Ruhija sector has four habituated gorilla families that are available for trekking meaning there are 32 gorilla permits available every day in Ruhija sector.

Gorilla families in Ruhija sector include the following;

Bitukura family, this has 14 members led by the dominant silverback Ndahura. This family is well known to be the friendliest with its members often entertaining visitors. It took only one and a half years to be habituated.

Oruzogo family, was habituated in 2010 and was opened for trekking in 2012. It has 23 members with the dominant silverback called Bakwate and its members are the most active so it would be a good gorilla family to tack.

Mukiza family, this family of gorillas was formed after splitting of Kyaguriro family. Mukiza family has 10 members.

Kyaguriro family has 15 members with Rukara as the leader. This family had 20 members before it split to form Mukiza family. This group was reserved for research but it was later opened for trekking with permission from Uganda wildlife Authority. The group was habituated in 1999.

Ruhija is well known as the best birding place in Bwindi impenetrable national park with more than 340 bird species and 23 endemic birds namely Black masked apalis, Rwenzori batis, red faced woodland warbler, Grauers rush warbler among others. if you are interested in birds, carry some binoculars to easily do the bird watching activity. More activities that are done in Ruhija are; community walks, nature walks so as to get in touch with nature and explore the forest on foot. You can still visit the batwa to learn about their traditional lifestyle.

Ruhija has differnt levels of accommodation, matching with all categories of visitors depending on choice and budget, there are a number of lodges to choose from including Bakiga lodge, Gorilla Mist Camp,Ruhija community rest camp, Broadbill forest camp and Ruhija gorilla safari lodge. Ruhija sector being at high elevation, is the coldest area in Bwindi being at an elevation of 2350 meters above sea level, most of the lodges will light up fire in the evening to keep visitors warm or give you hot water bottles for warmth in bed as you sleep.

Ruhija sector can be accessed by road and air. By road through Kampala – Kabale then ruhija or from Queen Elizabeth national park through Ishasha then ruhija. By flight there are charter flights from Entebbe airport to Kihihi Airstrip then you can connect to Ruhija by road since the plane doesn’t reach Ruhija direct.

Gorilla families in Rushaga include;

Nshongi family is the largest gorilla family which at the time of habituation had 36 members but as time passed it split creating more families. It has 25 members now with Nshongi silverback as a leader and other 3 silver backs. It was habituated in 2009. Nshongi family gave rise to other families like mishaya and Bweza. It derives its name from Nshongi River where it was first seen. Nshongi family is led by silverback Nshongi.

Mishaya family split from Nshongi group in 2010 led by silverback Mishaya which is well known for fighting. The family has 12 gorillas but continues to increase due to continued fights which win new members to the group. Mishaya later died in 2014 and was succeeded by Mwine silverback

Kahungye group has 3 silverbacks and 13 members with the dominant silverback being Rumanzi. It was opened for trekking in 2011 with 27 members but later split to form Busingye gorilla family.

Busingye family was formed after splitting from kahungye group in 2012 led by a peaceful silverback known as Rwigi which is good at fighting and attracting other females from other groups it encounters.

Bweza family also split from Nshongi family with 12 members with 2 silverbacks, 4 black backs, 3 females and 3 infants. It’s headed by silverback kakono who challenged Bweza in Nshongi families. It was habituated in 2013

Other activities to be carried out in Rushaga are cultural visitors to the batwa community in Kisoro, bird watching, going for canoeing on Lake Bunyonyi and forest walks.

Rushaga sector can be accessed by road from Kampala to Rushaga approximately 9hours or from Kigali to Rushaga through Chanika border taking 3 hours. It can also be accessed by air, there are daily flights to Kisoro airstrip from Entebbe where you can connect by road to Rushaga.

Nkuringo is one of the 4 gorilla trekking sectors located in the southern part of Bwindi impenetrable forest neighboring Rushaga sector and Buhoma sector. The gorilla families here are the most strenuous to trek, requiring maximum fitness to hike up and down the hills in search of gorillas. Besides being steep, it’s so rewarding with amazing views of mount Nyamuragira and Nyiragongo in Virunga national park of DR Congo so visitors enjoy beautiful scenary and the mountain gorillas on one trek. Visitors who love adventurous activities will enjoy the gorilla trek here in Nkuringo. The Nkuringo southern sector  has three habituated gorilla families that are open for tracking, meaning there are 24 gorilla permits every day for visitors.

The gorilla families are,

Nkuringo gorilla family, was the first one to be habituated in Nkuringo sector in 1997. The group was led by a silver back called Nkuringo which later died in 2008. The group was named after the ‘rolling hills’ called Nkuringo where they were first sighted at the time of habituation. Currently the family has 13 members with two silverbacks’ safari and rafiki. The group is led by Rafiki. This group was first to receive twin gorillas in December 2004 of which one twin unfortunately died before the second birthday.

Bushaho family, was habituated in 2012 after some members of Nkuringo family like a silverback known as Bahati left the group and joined bushaho. The Bushaho family has 8 members led by the dominant silverback Bahati.

Christmas family, is the newest group that has been habituated in Nkuringo sector. The family was named after the dominant silverback which born on Christmas. There are 9 individuals in this group.

Nkuringo has other activities that one can engage in after gorilla trekking and they are batwa cultural trail, forest walks, birding mostly done on Lake Mutanda and so many more.