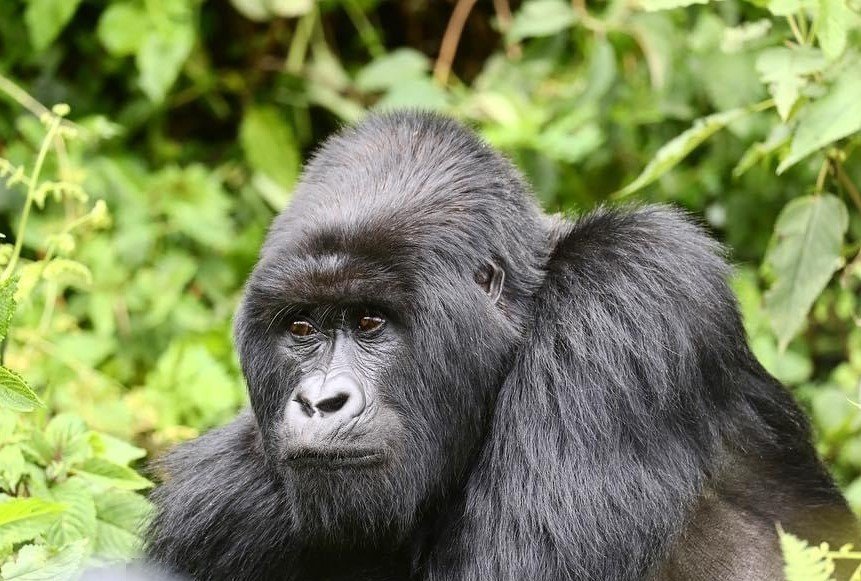 Facts about Mountain gorillas;  Mountain gorillas came to be known in 1902 when captain Von Berenge was climbing Mount Sabinyo with friends and when they camped they spotted mountain gorillas at 9300ft above sea level. They have survived the terrible years of wars, hunting, poaching, habitat encroachment and diseases.

In 1920, Studies about mountain gorillas started by an American known as Carl Akeley who travelled to Africa. Years later in 1959 George Schaller also conducted a study about the behavior, ecology and history of the mountain gorillas and published a book called The Mountain Gorillas in 1963 which tell all about his work and is still a reference to many readers.

In 1967 Dian Fossey arrived at Kabara meadow in Congo where Schaller had left a study base although she was later forced to move to Rwanda because of political instability that were happening in Congo. On arrival in Rwanda, She set up a camp called Karisoke. The name that derived from the two neighboring Volcanoes mountains, the Karisimbi and Bisoke.

Dian Fossey and her colleagues such as Sandy Harcourt started to habituate the gorillas and by 1972 they had habituated three groups including the famous group 4 and 5. Dian Fossey spent most of her days with the gorillas while watching and documenting their lives and the dangers for their survival such as poaching. They used habituation methods that other researchers had used like crawling down on knees and hands like the gorillas plus mimicking their sounds and voices. This marked the beginning of mountain gorilla conservation.

In 1973 the first attempt of gorilla trekking was introduced but was stopped due to lack of proper knowledge about the gorillas and experience on how to approach them. In 1978 Dian fossey’s lovely silver back called Digit was killed alongside five other individual gorillas. This raised concerns of how to protect these gorillas from poachers and snares. This led to the formation of Mountain Gorilla program in 1979 that aimed at introducing gorilla tourism which later became a model for gorilla conservation across Africa but focusing majorly in Rwanda.

Between 1980 and 1990 Research work and studies about the gorillas continued by many researchers like Caroline Tutin in Congo, Tom Butynski who staged in Uganda with Bill weber. These researchers conducted studies about genetics of gorillas, how males and females disperse, the feeding habits, gorilla population structure, gorilla census, the reproduction of gorillas, and the gorilla group formations.

In 1985 Dian Fossey was murdered at Karisoke research center in her cabin and was buried near the Karisoke center.  Currently her tomb is visited and her gorilla research program continued with the Digital fund becoming Dian Fossey Gorilla Fund.

During 1991 mountain gorilla research started moving steadily, this made Bwindi impenetrable forest and Mgahinga in Uganda to become national parks , Buhoma and Ruhija research stations were set up by the Institute of tropical forest conservation.

In this period, about four gorilla groups were habituated by the mid 90s, with Mubare gorilla family becoming the first habituated gorilla family in Uganda’s Bwindi forest which were later opened for tourism in 1993. As research was moving on in Uganda, the genocide war broke out in Rwanda that caused loss of many peoples live. Karisoke research Centre was destroyed in 1994 during the war.

Though the research center is not physically present as of now but its activities still take place. The mountain Gorilla project evolved in 1991 into International Gorilla Conservation program (IGCP) which is now comprised of African Wildlife Foundation (AWF), fauna and Flora International (FFI) and World wide fund for nature(WWF). This program later extended its activities covering the entire mountain gorilla range of Uganda, Rwanda and Democratic Republic of Congo. In the year 2000 more gorilla families were habituated for tourism purpose.

These mountain gorillas live in areas of high altitude (8000-13000 feet) as their name suggests and have thick fur to keep them warm in the mountains compared to their cousin the lowland gorillas and other great apes. thus being able to only survive in these areas where temperature are too low to freezing. They can only be seen in Virunga mountains namely Mgahinga in Uganda, Volcanoes national park in Rwanda and Virunga in Congo. The rest of the mountain gorilla population live in Bwindi Impenetrable forest national park in Uganda. Mountain gorillas are larger in size though with short arms.

The lifespan of gorillas; gorillas live and survive in the wilderness up to 40-50 years. Mountain gorillas live in communities called groups or Families, comprising of adult males known as silverbacks, younger males called black backs, adult females and young ones. These groups comprise of members from two and above up to 40. The oldest and strongest silverback leads the group and is in charge of protection, decision making, disciplining other members, breeding between them.

All the other male gorillas in that group stay solitary until they form their own groups. The most troops/families where there is more than one silverback, the rest are usually off springs of the dominant silverback. Gorilla troops usually have their homes that range from 10-15miles where they feed and rest. Male gorillas usually take about 4 years to completely leave their original troop; they keep distancing themselves from the troop while attracting some of the other members especially the females until they completely form their own troop.

Female gorillas take about 8 and a half months to have a baby and they produce only 3 or 4 off springs in their lifetime. The young gorillas are nursed by their mothers up to 4 years where they can feed and walk on their own. Newborn gorillas are always small and weak weighing about 4 pounds but they grow so fast. They cling on to their mother’s fur until they reach about 4months when they can stand on their own. Mothers breastfeed and protect their infants. Males start to breed between 12 and 15 years where as female gorillas became sexually mature at the age of 7 or 8 years.

Mountain gorillas feed on mostly leaves, shoots, flowers and less of fruits. Mountain gorillas feed on celery, bamboo, thistles, stinging nettles and bedstraw but gorillas rarely drink water. Adult gorillas eat up to 25kg a day. Gorillas are nomadic animals so they make their nests at the end of each day by bending tree branches and using leaves. They move from one place to another while foraging so they make nests wherever the dusk finds them. Female gorillas sleep with the infants and the older gorillas make themselves a nest each. The nests are built off the ground to protect them from parasites and the cold grounds.

In General, mountain gorillas are gentle and calm animals but they are so aggressive when disturbed. The dominant silverback will always roar, hoot, bark, throw things, beat the chest so hard and charge especially when it senses danger. The silverback protects all the members in the family and can do anything even fighting to death to protect the entire family. Gorillas have strong attachments to members of their own family that even when they mix up, slowly they will part and separate to their individual groups.